The extinguishing effect of inert gases is achieved by displacing the oxygen in the air. Assets are protected by the slow response that is typical of the inert gases CO2, nitrogen and argon.

Basics as Fire Alarm Systems and Gas Protection Systems or innovations like cost-reduction with automated system inspections and the retrofit of Fire Dampers.

Regular checks of fire sprinklers are required according to the VdS and FM guidelines. The control operations are divided into daily, weekly and monthly sections and must be documented in a log book. In particular, the verification of the alarm pressure switches, flow switches and the pumps represents a lot of work, which is significantly reduced by the use of MasterControl automation. This results in cost savings, which pays for the investment costs within a short period of time.

The regular inspections are divided into the daily inspection of the system and regular trial runs of the individual system components. 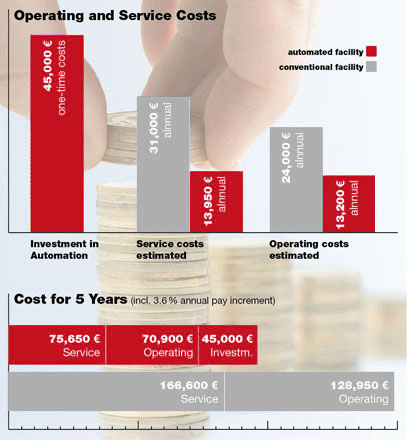 The MasterControl system performs the routines to be tested fully automatically. All test results are documented immediately after the end of the test phases. A built-in printer and the graphical depiction of the sprinkler system is made available in the visualization system.

Via solenoid operated valves, water flow through the alarm valve is simulated and the alarm chain is triggered. The control and documentation are undertaken automatically as per a predetermined sequence via the automation system. By means of parallel assigned valves to the flow switches and circulating pumps, a remote controlled water flow can only be produced by the respective flow detector. The response of the detector is again automatically displayed and documented in the visualization.

In order to assess the pump performance, the recorded pressure and flow values ??are shown by the visualization in graphs and tables and compared with the reference curve.

After completion of the test phase, all individual results are issued by the integrated printer and can be permanently archived according to the documentation policy.

These are the advantages of automated inspection on your sprinkler system with Rosenbauer MasterControl:

MasterControl handles all of the required inspections

In addition to the weekly test runs

* The comparison of the recorded characteristic curve and manufacturer characteristic curve provides information about the condition of the sprinkler pump. The relevant pump will start automatically for implementation. Electrical control valves set the specified flow rates and the corresponding sensors record the pressures. The control valves are usually modified fully digitally by the control unit.

Nearly three decades of experience in planning and designing fire protection systems for all cases of safety requirements.

Supervision and construc- tion according to various safety standards by our own engineers and high qualified personnel.

Continuous maintenance by trustworthy partners is the key to an unimpeachable preventative fire protection system.

Any questions to your own fire protection project? Our experts are happy to help you further.

ALMOST THREE DECADES IN IMPLEMENTING FIRE PROTECTION SYSTEMS AND STILL ON FIRE FOR IT.

This common type of water-based fire extinguishing system is reliable and easy to implement.

The consitent use of VdS-proven components and diligent installation guarantees the highest leves of safety and compatibility to international standards.

Deluge systems are the first choice in areas with a risk of rapidly spreading fires.

In case of fire, these spray deluge systems expose the protected object rapidly and extensively to extinguisher water. Also particularly suitable for cooling.

Water mist already exerts its effect on flames and smoke – for safety of people and assets.

Water mist extinguishing systems with pressure up to 120 bar needing less water, energy and space – the more, the less.

CO2 is inexpensive, reliable, and is completely without residue – Systems are avaiable from a single rack to complex spatial solutions.

Systems certified for risk classes up to SIL 2 – an integral component in security concepts.

Fire protection for power, petrochemical and process engineering – corresponding systems have been developed and installed for clients such as MAN, Kawasaki and Atlas Copco.

PROTECT DP AND IT SYTEMS

The NOVEC system saves space with minimal assembly and installation work in or in front of the protected area.

Get our Sprinkler-App! A useful tool to evaluate dimensions of sprinkler systems.

FOR ENGINEERS AND TECHNICIANS

ROI IN LESS THAN FIVE YEARS

Renovate the fire dampers by installing a low-pressure extinguisher system.

Low pressure extinguishing technology can be used as an alternative measure for old fire dampers to meet actual requirements.
Go to Top